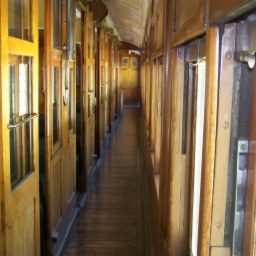 The centrepiece of the Carriage Café Seville is its over 100 year old carriage.

Constructed in 1910, this carriage originally ran along the Albury to Seymour line, before being repainted red, white and blue to become a tourist train in S.A.

The carriage ran until 2001 before sitting idle, however in 2009 it was brought back to Victoria and repainted to its original Indian Red colour, then in 2010 the Carriage Café Seville opened its doors for the first time.